Around 10 years ago I joined Amazon Web Services and that’s where I first saw the importance of trade-offs in distributed systems. In university I had already learned about the trade-offs between consistency and availability (the CAP theorem), but in practice the spectrum goes a lot deeper than that. Any design decision may involve trade-offs between latency, concurrency, scalability, durability, maintainability, functionality, operational simplicity, and other aspects of the system—and those trade-offs have meaningful impact on the features and user experience of the application, and even on the effectiveness of the business itself.

Perhaps the most challenging problem in distributed systems, in which the need for trade-offs is most apparent, is building a distributed database. When applications began to require databases that could scale across many servers, database developers began to make extreme trade-offs. In order to achieve scalability over many nodes, distributed key-value stores (NoSQL) put aside the rich feature set offered by the traditional relational database management systems (RDBMS), including SQL, joins, foreign keys, and ACID guarantees. Since everyone wants scalability, it would only be a matter of time before the RDBMS would disappear, right? Actually, relational databases have continued to dominate the database landscape. And here’s why:

The most important aspect to consider when making trade-offs in a distributed system (or any system) is development cost.

The trade-offs made by your database software will have significant impact on the development cost of your application. Handling data in an advanced application that needs to be usable, reliable, and performant is a problem that is inherently complex to solve. The number of man hours required to successfully address every little subproblem can be enormous. Fortunately, a database can take care of many of these subproblems, but database developers face the cost problem as well. It actually takes many decades to build the functionality, guarantees, and performance that make a database good enough for most applications. That’s where time and again, established relational databases like PostgreSQL and MySQL come in.

At Citus Data, we’ve taken a different angle to addressing the need for database scalability. My team and I spent the past several years transforming an established RDBMS into a distributed database, without losing its powerful capabilities or forking from the underlying project. In doing so we found that an RDBMS is the perfect foundation for building a distributed database.

Lowering application development costs by building on top of an RDBMS

What makes an RDBMS so attractive for developing an application—especially an open source RDBMS, and especially a cloud RDBMS—is that you can effectively leverage the engineering investments that have been made into the RDBMS over a period of decades and utilise these RDBMS capabilities in your app, lowering your development cost.

An RDBMS provides you with:

These capabilities matter to almost any non-trivial application, but take a long time to develop. On the other hand, some applications have a workload that is too demanding for a single machine and therefore require horizontal scalability.

Many new distributed databases are being developed and are implementing RDBMS functionality like SQL on top of distributed key-value stores (“NewSQL”). While these newer database can use the resources of multiple machines, they are still nowhere near the established relational database systems in terms of SQL support, query performance, concurrency, indexing, foreign keys, transactions, stored procedures, etc. Using such a database leaves you with many complex problems to solve in your application.

An alternative that has been employed by many big Internet companies is manual, application-layer sharding of an RDBMS—typically PostgreSQL or MySQL. Manual sharding means that there are many RDBMS nodes and the application decides which node to connect to based on some condition (e.g. the user ID). The application itself is responsible for how to handle data placement, schema changes, querying multiple nodes, replicating tables, etc—so if you’re doing manual sharding, you end up implementing your own distributed database within your application, which is perhaps even more costly.

Fortunately, there is a way around the development cost conundrum.

PostgreSQL has been under development for several decades, with an incredible focus on code quality, modularity, and extensibility. This extensibility offers a unique opportunity: to transform PostgreSQL into a distributed database, without forking it. That’s how we built Citus.

When I joined a start-up called Citus Data around 5 years ago, I was humbled by the challenge of building an advanced distributed database in a competitive market without any existing infrastructure, brand recognition, go to market, capital, or large pool of engineers. The development cost alone seemed like it would be insurmountable. But in the same way that application developers leverage PostgreSQL to build a complex application, we leveraged PostgreSQL to build… distributed PostgreSQL.

Instead of creating a distributed database from scratch, we created Citus, an open source PostgreSQL extension that transparently distributes tables and queries in a way that provides horizontal scale, but with all the PostgreSQL features that application developers need to be successful.

Using internal hooks that Postgres calls when planning a query, we were able to add the concept of a distributed table to Postgres.

The shards of a distributed table are stored in regular PostgreSQL nodes with all their existing capabilities, and Citus sends regular SQL commands to query the shards and then combines the results. We also added the concept of a reference table, which is replicated across all nodes and can therefore be joined with the distributed tables by any column. By further adding support for distributed transactions, query routing, distributed subqueries and CTEs, sequences, upserts and more, we got to a point where most advanced PostgreSQL features just work, but now at scale.

Citus is still relatively young but is already one of the most advanced distributed databases in the world by building on top of PostgreSQL. While comparing to the full feature set of PostgreSQL is humbling and there is still a lot to do, the capabilities that Citus provides today and the way it scales out, make it largely unique in the distributed database landscape. Many current Citus users initially built their business on a single node PostgreSQL server, using many of the advanced capabilities in Postgres, and then migrated to Citus with only a few weeks of development effort to convert their database schema to distributed and reference tables. With any other database, such a migration from a single-node database to a distributed database could have taken months—or even years.

An RDBMS like PostgreSQL has an almost endless array of features and a mature SQL engine, which lets you query your data in infinitely many ways. Of course, these features are only useful to an application if they are also fast. Fortunately, PostgreSQL is fast and keeps getting faster with new features such as just-in-time query compilation, but when you have so much data or traffic that a single machine is too slow then those powerful features aren’t quite as useful anymore… unless you can combine the computing power of many machines. That’s where features become superpowers.

By taking PostgreSQL features and scaling them out, Citus has a number of superpowers that enables users to grow their database to any size while maintaining high performance and all its functionality. 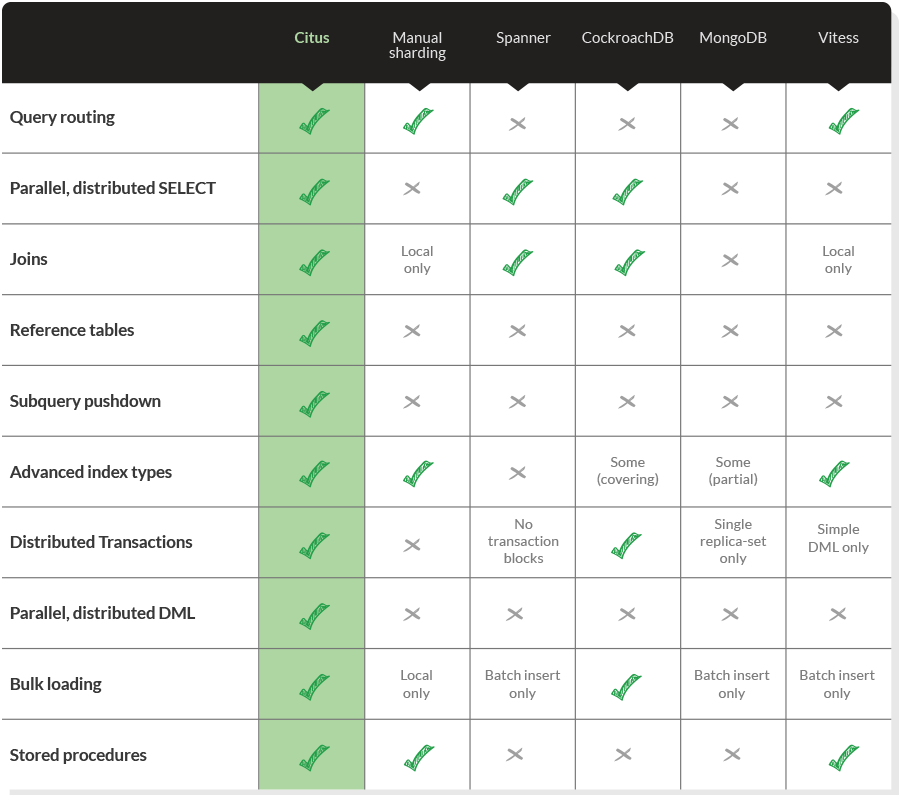 Support for query routing, reference tables, indexes, distributed transactions and stored procedures makes even the most advanced multi-tenant OLTP apps such as Copper able to scale beyond a single PostgreSQL node using Citus without making any sacrifices in their application.

If you use subquery pushdown in combination with parallel, distributed DML, then you can transform large volumes data inside the database. A common example is building a rollup table using INSERT…SELECT, which can be parallelised to keep up with any kind of data volume. Combined with bulk loading through COPY, indexes, joins, and partitioning, you have a database that is supremely suitable for time series data and real-time analytics applications like the Algolia dashboard at scale.

As Min Wei from Microsoft pointed out in his talk about how Microsoft uses Citus and PostgreSQL to analyse Windows data: Citus enables you to solve large scale OLAP problems using distributed OLTP.

Citus is a little different from other distributed databases, which are often developed from scratch. Citus does not introduce any functionality that wasn’t already in PostgreSQL. The Citus database makes existing functionality scale in a way that satisfies use cases that require scale. What’s important is that most of the PostgreSQL functionality has been developed and battle-tested over decades for a wide range of use cases, and the functional requirements for today’s use cases are ultimately not that different; it’s primarily the scale and size of data that’s different. That is why a distributed database like Citus, that’s built on top of the world’s most advanced open source RDBMS (PostgreSQL!), can be the most powerful tool in your arsenal when building a modern application.