The Citus distributed database scales out PostgreSQL through sharding, replication, and query parallelization. For replication, our database as a service (by default) leverages the streaming replication logic built into Postgres.

The PostgreSQL database follows a straightforward replication model. In this model, all writes go to a primary node. The primary node then locally applies those changes and propagates them to secondary nodes.

In the context of Postgres, the built-in replication (known as “streaming replication”) comes with several challenges:

The first two challenges are well understood. Since the last challenge isn’t as widely recognized, we’ll examine it in this blog post.

Three approaches to replication in PostgreSQL

Most people think that when you have a primary and secondary architecture, there’s only one way to set up replication and backups. In practice, Postgres deployments follow one of three approaches. 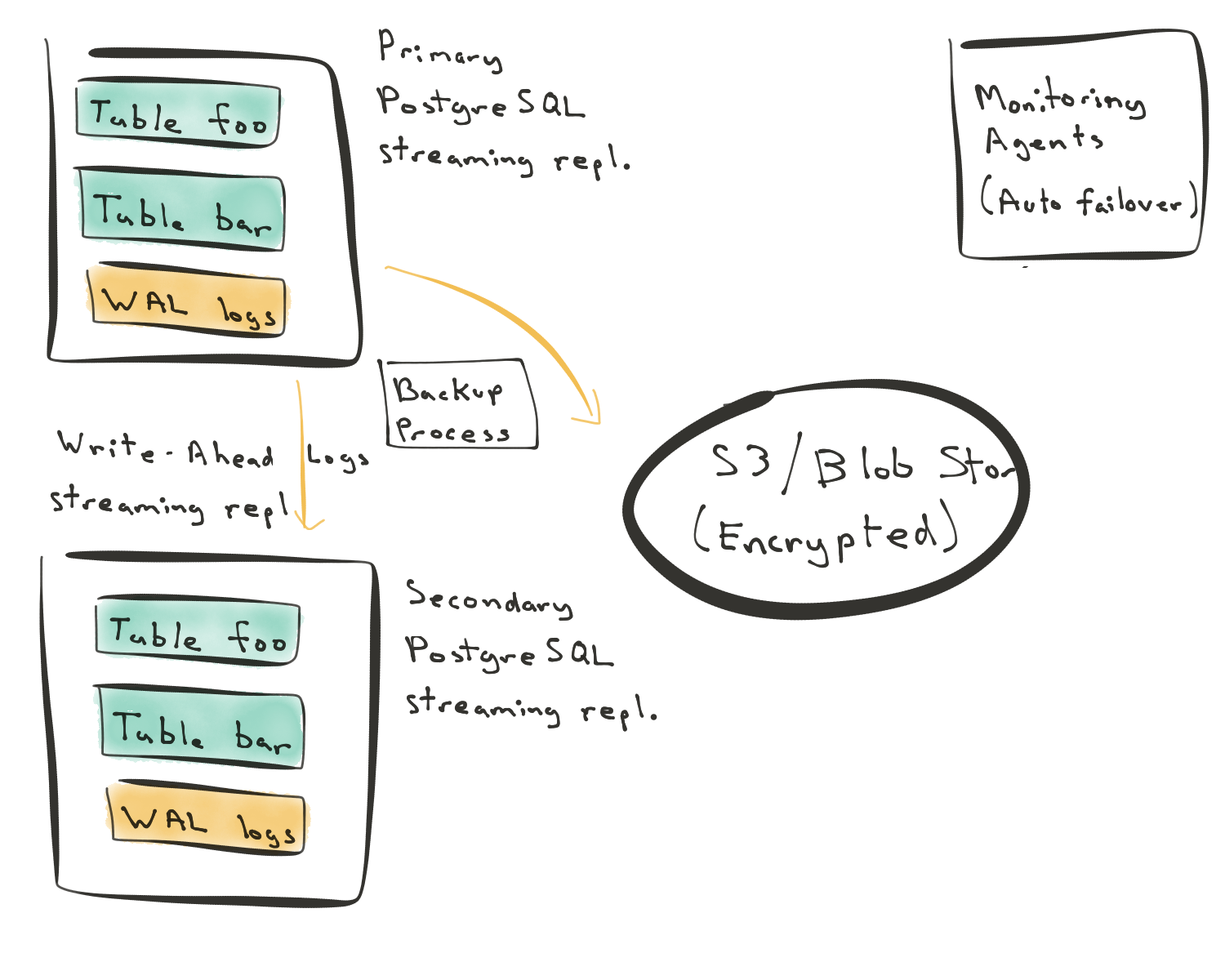 This first approach is the most common one. You have a primary node. The primary node has the tables’ data and write-ahead logs (WAL). (When you modify a row in Postgres, the change first gets committed to an append-only redo log. This redo log is known as a write-ahead log, or WAL.) This Postgres WAL log then gets streamed over to a secondary node.

In this approach, you can use local disks or attach persistent volumes to your instances. In the diagram above, we’re using local disks because that’s the more typical setup. 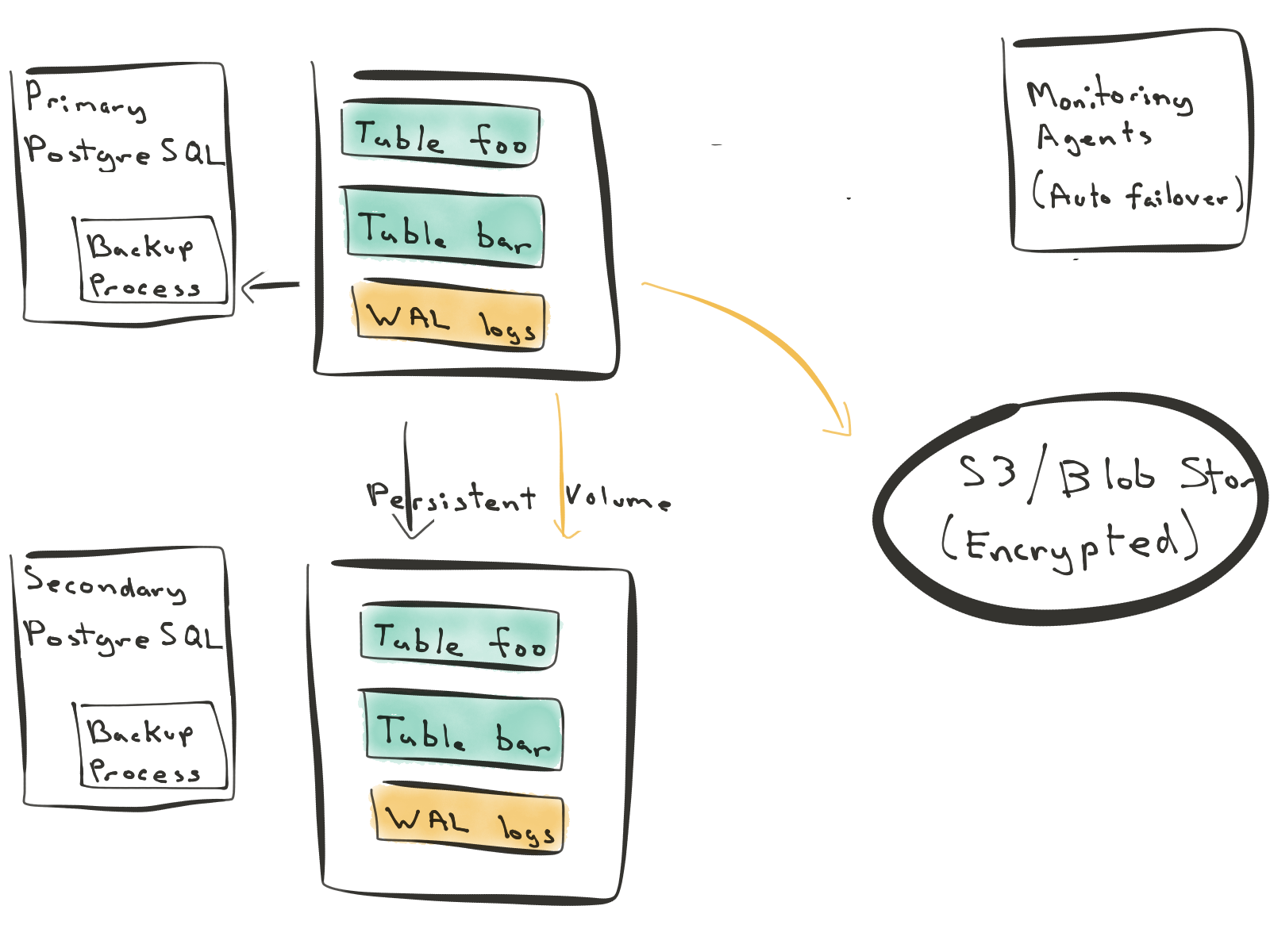 The second approach relies on disk mirroring (sometimes called volume replication.) In this approach, changes get written to a persistent volume. This volume then gets synchronously mirrored to another volume. The nice thing about this approach is that it works for all relational databases. You can use it for MySQL, PostgreSQL, or SQL Server.

However, the disk mirroring approach to replication in Postgres also requires that you replicate both table and WAL log data. Further, each write to the database now needs to synchronously go over the network. You can’t miss a single byte because that could leave your database in a corrupt state.

Approach #3: Reconstruct from WAL (and switch to streaming replication) 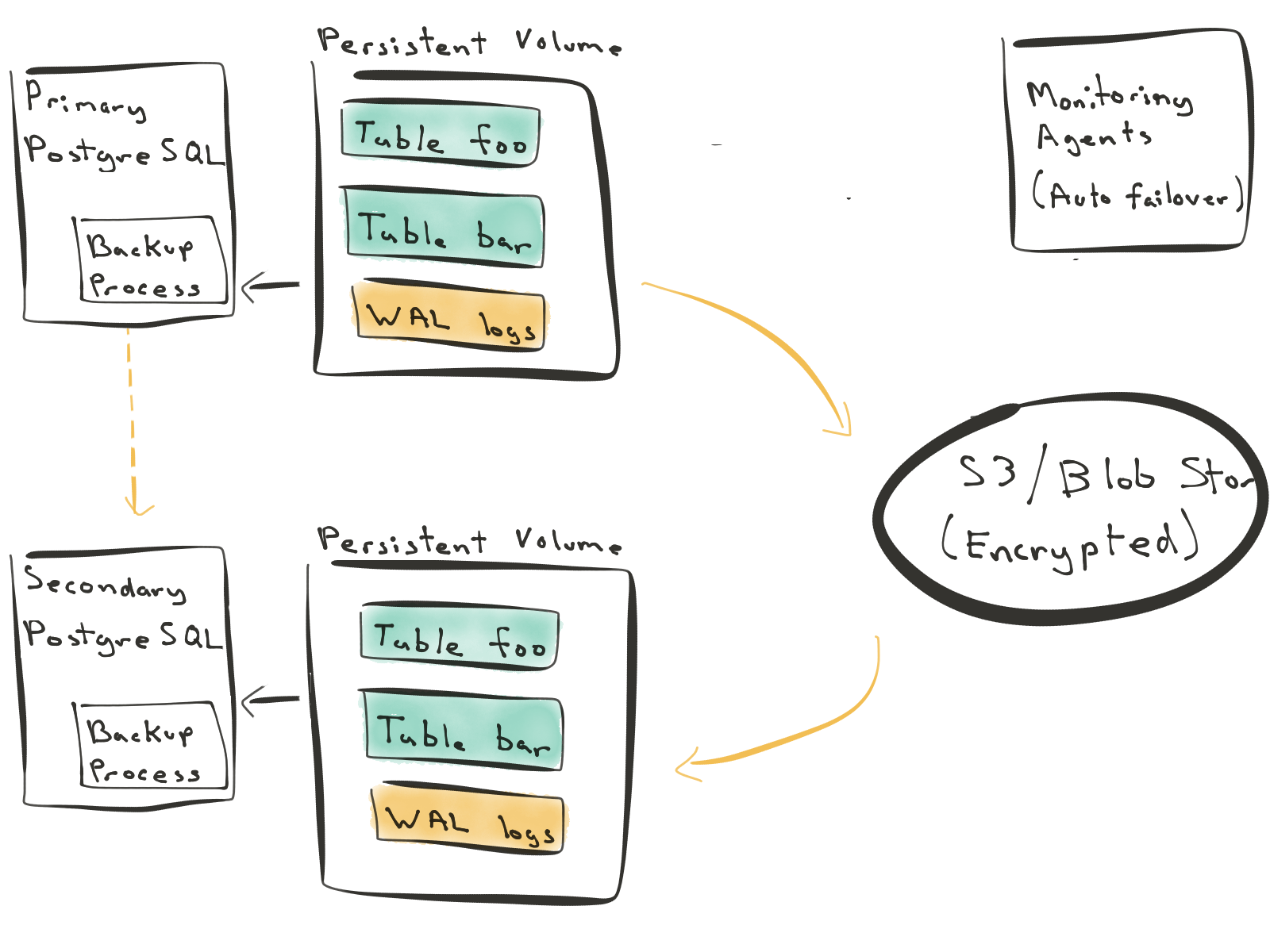 The third approach turns the replication and disaster recovery process inside out. You write to the primary node. The primary node does a full database backup every day, and incremental backups every 60 seconds.

In this approach, write-ahead logs are first class citizens. This design lends itself to a more cloud-native architecture. You can bring up or shoot down replicas at will without impacting your relational database’s performance. You can also use synchronous or asynchronous replication depending on your requirements.

How do these different approaches to Postgres replication compare?

Here’s a simple table that compares these approaches to each other. For each approach, you can think of its benefits as drawbacks for the other approaches.

Simple streaming replication is the most common approach. Most on-prem deployments follow this approach. It’s easy to set up. Further, when you set it up using local disks, you can store 10s of TBs of data.

Comparatively, the disk mirroring approach abstracts away the storage layer from the database. In this approach, when you lose an instance, you don’t lose your ephemeral disk with it. This approach also works across database technologies, for example with MySQL and Postgres.

In the third method, when you have a new machine, you reconstruct that machine’s state from WAL logs. Since you’re treating your WAL logs as a first class citizen, certain features become trivial. For example, let’s say you wanted to performance test your application against production data, but not against the production database. In the third method, you can “fork” your database from a particular point in time in WAL logs without impact to production, and test your app against the forked database.

The third approach reconstructs a new secondary node by replaying write-ahead logs (WAL) from blob storage such as S3. As a result, reconstructing a new replica doesn’t introduce any additional load on the primary node. This enables a high-availability (HA) solution where you can easily bring up or shoot down database nodes—a property that’s beneficial in cloud-native environments.